Zinius puts the cherry on the cake for Stal De Muz... 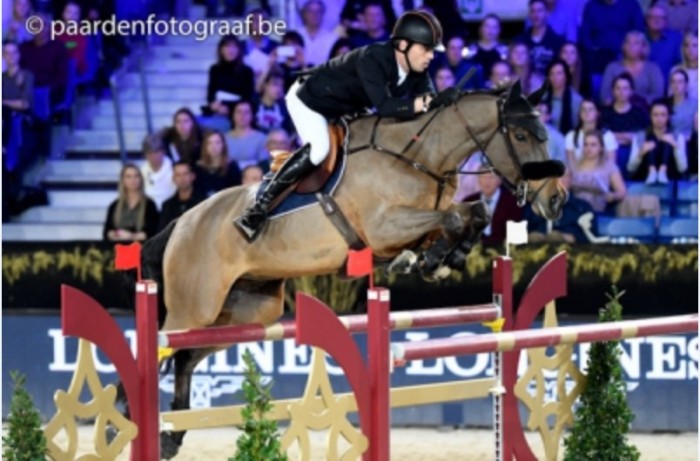 As usual, a lot of horses that are somehow connected to Stal De Muze were present during the Memorial Eric Wauters. The year 2017 ended very well for us in Mechelen. The absolute highlight was of course the victory of Zinius, son of Nabab de Rêve in the World Cup, ridden by the Dutch rider Harrie Smolders. Earlier during the week, Zinius grabbed the second spot in the KBC Prize. In the same class, Niels Bruynseels rode Angel van ‘t Hof, son of Chin Chin, but out of a mother by Nabab de Rêve to the third place. The same duo also won a class, namely the Prize Stephex.

The second important class was also won by a horse that has a close connection to Stal De Muze. It concerns Gancia de Muze. This mare, bred by Perry De Winter, won a lot of competitions this year and confirmed her status as ‘the one to beat’ in Mechelen. Gancia is a daughter of Malito de Rêve combined with the Nimmerdor-mare Barones. In the warm-up class over 1.40m there was a sweet second place for Gentiane de la Pomme, daughter of Shindler de Muze (this stallion is a son of For Pleasure out of the GP mare Nelke van het Waterschoot). The mother of Gentiane is the result of the combination of Diamant de Semilly and Nabab de Rêve. With Wilm Vermeir in the saddle, Gentiane also finished seventh in the Samsung speed course.

Some more offspring of Nabab de Rêve in the Ifor Williams Prize. Thomas Van Minnebruggen piloted Ibbo van ‘t Keldertje (f. Emerald N.O.P.) to the third place, but not only as a grandfather, Nabab de Rêve was very much present in Mechelen. Also directly as sire he made quite the impression. In the AVEVE Super Cup final for six year olds, two of his offspring claimed a spot in the top five. Lionel van het Weidse Hof finished second, Louque van den Blauwaert fifth.

Bamako is up and coming

This Brunello is a son of Bamako out of the GP-mare Ferly de Muze, sired by Calato. This brings us to the Queens Cup, where the same combination took the fifth place with only one penalty for time. In the same class, Claire Putters and Fa Belle van Sombeke, daughter of Querlybet Hero were third. Darcotique van ‘t Meulenhof (f. Marius Claudius), full sister to Denzel van ‘t Meulenhof, was fourth, ridden by Marjan De Wachter. Further down in the top ten, there was Demoiselle de la Pomme (f. Erco van ‘t Roosakker), ridden by Vicky Van De Poel. Demoiselle is a daughter of Carrera de Muze, who is on her turn a daughter of the Nabab-mare Walnut de Muze. Gladiator van ‘t Paradijs eventually ended tenth with Elisa Strubbe.

But there is more, in the classes for sires, there were also excellent results. In the ‘Sires of the World’, a magnificent fourth spot was reserved for Valmy de la Lande, son of Mylord Carthago. Mylord Carthago is a son of the legendary mare Fragance de Chalus and is therefore a half-brother to for example Bacardi-Orange de Muze and Norton d’Eole. Le Blue Diamond van ‘t Ruytershof (f. Plot Blue), owned by Joris De Brabander and Jan Vermeiren was victorious in the class for six year old stallions. Le Blue Diamond is a son of Diamanthina van ‘t Ruytershof (f. Diamant de Semilly) and is therefore a nephew to Harrie Smolders’ famous stallion Emerald.

Another classic during the week in Mechelen is the loose jumping for two year olds. Fourth place in this competition was reserved for Vitamine du Dieu D’Arras, daughter of Vigo d’Arsouilles. In the same class, the sixth spot went to Edgard van Generhese, sired by Elvis Ter Putte.

Student riders are also present in Mechelen and it was the Elvis Ter Putte-offspring Eldo van het Plutoniahof Z that emerged victorious, ridden by Jonas Troubleyn.

That was all regarding the Memorial Eric Wauters, but in Liverpool some great results turned up as well. Ipswich van de Wolfsakker, son of Carembar de Muze, grabbed two second place in 1.50m classes over there, ridden by Shane Breen.

Last but not least in Vincennes, it was As de Muze that triumphed in the trot class for seven year old horses. 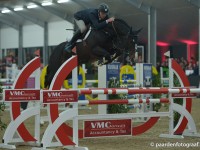