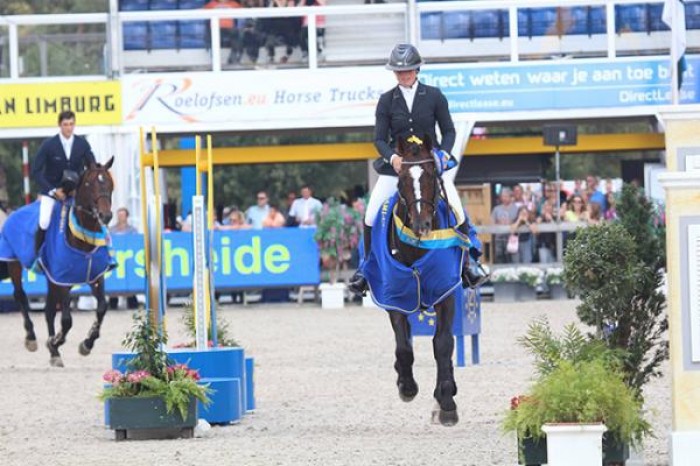 Great news reached us from the south of Spain where Fantomas de Muze and Karline were one of the few duos that were able to get through Oliva's GP without penalties. This resulted in a great fifth place. Not only Fantomas himself, but also his offspring is jumping more and more into the spotlight. Kenia van 't Laerhof and Jane Richard Philips were victorious in a 1.50m class in Doha.

Riding one of our other stallions, the only seven-year-old Navajo van 't Vianahof, Karline finished tenth in a 1.40m class. In the same class there was a second place for Pirate d'Andalou (s. Nabab de Rêve) and Ruben Romp. Also for Kasanova de la Pomme and Lector vd Bisschop there were clear rounds at that height.

In the GP1* we noted a tenth place for Margriet de Mariposa (s. Nabab de Rêve) and Jérôme Guery.

In the United Arab Emirates, Hannah-Gold (v. Nabab de Rêve) took the silver medal in the GP2*. She was ridden by Mohd Osama El Borai.

Bamako de Muze can of course not be omitted in this weekly overview. Claire Putters jumped to a fourth place in the GP of Vilamoura with her twelve-year-old Copain de Muze. As his name suggests, this gelding was indeed bred by Stal de Muze. Still in Vilamoura there was a second place for Marta Bottanelli on Vesthigo Z (s. Vigo d'Arsouilles) and a fourth place for Lila Bremner on Memphis v/d Vaart (s. Elvis Ter Putte) in a 1.40m class.

More successes for our breeding products in Wellington, where Go Easy de Muze (s. Vigo d'Arsouilles) was part of the Irish team that took silver in the Nations Cup. In the GP of Thermal Karl Cook finished at number seven with Ircos IV (s. Nabab de Rêve).

Nabab's Atlanto (s. Nabab de Rêve) and Mikael Forsten did good business in Valencia and grabbed a second place in a 1.40m class. In the GP of the Mexican Balvanera finally, E-Muze Yek, bred by Joris De Brabander and Walter Lelie, finished in tenth place ridden by Alejandro Leonardo Winkler.

To finish this week’s overview, we take a closer look at the results of our youngest stallions in the PAVO stallion competition.

Eames de Hus was once again double clear (fourth time in a row) and is currently standing eighth in the intermediate rankings of the six-year-olds competition. New Star Quality equally continues to do well in the competition for seven-year-olds. In Tielt, he was again good for a second place, a position he also holds in the intermediate classification. Finally, Qartoon de Muze jumped a second clear round in a row with Tim Van den Broeck. We are undoubtedly looking forward to the final that takes place after the third phase of the BWP stallion approvals next week. 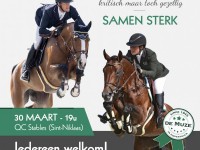