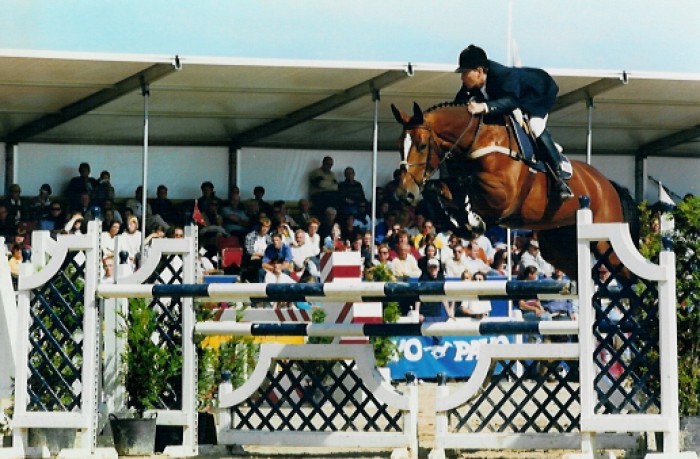 Two full-brothers from the same year that occupy the first and the second place in an international class, that does not happen very often, but it happened last week in Tryon in a 1.45m-class thanks to Kirschwasser SCF and Kir Royal SCF. Both of them are sons of Amaretto d’Arco out of Werly Chin de Muze (f. Nabab de Rêve). Werly Chin is on her turn a daughter of our famous Qerly Chin (f. Chin Chin). Nabab de Rêve also delivered the number five in this class, thanks to Il Rubacuori and Roberto Teran Tafur.

We stay on the other side of the Atlantic Ocean, with the CSI3* in Coapexpan, Mexico. Diego Javier Vivero Viteri and Capiche ‘ter Elzen’ (f. Bamako de Muze) showed their form by winning a 1.45m-class and finishing fourth in another. In Del Mar, the fourth place in a 1.50m-class went to John Pearce and Firestone S (f. Querlybet Hero). Beezie Madden and Chic Hin d’Hyrencourt finished second at the same height in Harrisburg.

Some more great news coming from the unsightly French town Le Lion d’Angers. Since a couple of years, the WC for young eventing horses is organised there. Our stallion Leipheimer van ‘t Verahof performed excellently in the championship for seven-year-olds. With Karin Donckers, the full-brother to Fletcha van ‘t Verahof (f. Vigo d’Arsouilles) became fourth. Just next to the podium, but very promising for the years to come.

Also in France, but in Dunkerque this time, Alexandre Cardon and Bali de l’Héribus (f. Vigo d’Arsouilles) finished fourth in the GP2*. In Swiss Chevenez, the sixth place in the GP went to Simone Buhofer and Flying Girl (f. Querlybet Hero). A three star competition went down in Vilamoura, with in the end an eight place in the grand prix for James Wilson and Townhead Imagine de Muze (f. Nabab de Rêve).

The Azelhof in Lier was once more the décor for a CSI2* and a CSIHY*. Dimitri Noterman and Bacardi-Rhum de Muze won a 1.40m-class, while Bas Moerings and Fasther (f. Vigo d’Arsouilles) became fourth. Be Cute van de Wolfsakker Z (f. Bamako de Muze) jumped into the spotlight with Sam Polleunis as did our stallion Kaiser van het Lambroeck (f. Nabab de Rêve) thanks to twice a double clear in the 1.40m-class.

We end our overview with our neighbours up north, where young horse-competitions took place in Zwolle and Kronenburg. Guinness (f. Nabab de Rêve) and Bertram Allen showed their potential once more in the classes for seven-year-olds in Zwolle, while Houdini van de Dijk (f. Vigo d’Arsouilles) and Abdel Saïd did the same in Kronenburg as a six-year-old. 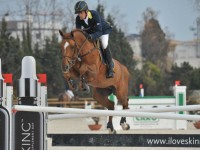