Two names literally and figuratively stood out last weekend if we are talking about horses that have a ‘Stal de Muze’-link.

First up is Bellissimo Z (f. Bamako de Muze), who claimed the victory in the GP of Lier with up-and-coming rider Thibeau Spits. Also at Azelhof, there was a fifth place for Pieter Clemens on Icarus (f. Querlybet Hero) in a 1.45m-class and a second place for former Belgian national coach Dirk Demeersman and Kaiser “T” “FVD” (f. Nabab de Rêve) over 1.40m. In the classes for young horses, our attention was drawn by Manolito P, a six-year-old son of I’m Special de Muze, who ended second twice with British rider Holly Smith.

The other protagonist-duo of last weekend consisted of Jur Vrieling and Glasgow van ‘t Merelsnest (f. Nabab de Rêve). Not only were those two part of the Valkenswaard United-team that won the Global Champions League of Cannes, but they also added a fourth place in the GP to that.

Great results by Nabab-progeny were achieved also in Poznan, where Nabab’s Atlanto, full-brother to our Cadeau de Muze, won a 1.45m-class right under the nose of his half-brother Naccord Melloni. The latter also finished fifth in another 1.45m-class. Same story in Athens, where Nabab de Rêve was also omnipresent on the result sheets. Kalvarie van de Zelm grabbed two fifth placing over 1.40m and 1.45m respectively and Brandy Sugar SKB completed that with a second place in an accumulator class.

There were also some promising stars to be by Nabab performing. In Treffen for example, where Novita Jovial Z and Laura Renwick finished fifth in a class for seven- and eight-year-olds. In Wiener-Neustadt Ivan FH managed a clear round in the classes for five-year-olds with Samuel Matejka and in San Remo, Felipe Juares de Lima and Monseigneur jumped to a nice second place in one of the classes for six-year-olds.

The honour to round up this week’s overview is for a household name, namely Fidux. The son of Malito de Rêve jumped to a third place at the CSI5* of Treffen in a 1.55m-class. Rider, of course, was Eduardo Alvarez Aznar. 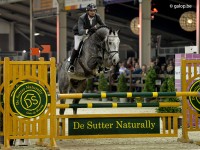