Ocala, US was the starting point for a brand new FEI Nations Cup Series season. Two sons of Vigo d’Arsouilles stood out from the crowd during this first event and took care of two excellent placings. The victory went to Canada, not in the least thanks to a double clear from old but gold Ian Millar and his Dixson (mf. Olisco). Dixson is linked to Stal de Muze not only because of his famous father, but his dam line is also the dam line of Calgary-winner Candy, who is owned by us.

Another exceptional Vigo-progeny was (and is) Go Easy de Muze. Go Easy is out of Teekitiezzie de Muze, a daughter of For Pleasure. Further down the dam line there is Qerly Chin. Ridden by Darragh Kenny, Go Easy helped Ireland to claim the bronze medal.

There was some more family news this week by the way. Vagabond de la Pomme, out of the combination of Vigo d’Arsouilles and For Pleasure as well and a cousin to Go Easy, will be ridden by French rider Nicolas Delmotte from now on instead of Penelope Leprevost.

It slowly becomes a weekly habit to talk about Elvis Ter Putte in these articles. Last week it was Intenz van HD that claimed a place in the spotlight. Ridden by Tracy Magness, the mare jumped towards a third place in the national GP of Ocala. Intenz is again by the famous mare Candy and as said before, is sired by Elvis Ter Putte.

In Lier it were the youngsters that showed very promising. In the class for seven-year-olds, Labrusca de Muze impressed with Evert Van Mele. Labrusca is a daughter of Chica de Muze, who is on her turn by Bamako de Muze and who jumped at 1.50m-level. The dam line then refers to Boyante de Muze (f. Kashmir van Schuttershof) and then we see Qerly Chin. Another remarkable Elvis-son was Louisiano van het Blondveld, bred by Paul Baert from Londerzeel out of a mare by Querlybet Hero.

Another regular customer in these news flashes is our unfortunately deceased topsire Nabab de Rêve. Luckily for us, even after his death, his progeny continues to honour his name. One of the promising stallions that might follow in Nabab’s footsteps is Kaiser van het Lambroeck. Since he has been confided to the riding skills of Brazilian rider Cassio Rivetti, he seems to jump better every week. The duo is jumping in Vilamoura at this moment and this week they managed clear rounds in a 1.35m- and a 1.40m-class. To see a short clip of his jumping over there in Portugal, go to our Facebookpage.

Still in Vilamoura Gitano van Berkenbroeck added another victory to his already impressive list of honours. In Poland, to conclude this week, there is another emerging Nabab-star. His name his Naccordi Melloni, he is Dutch bred and het jumped to a third place in the GP of Lublin. 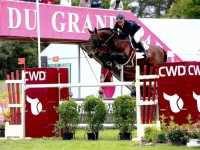